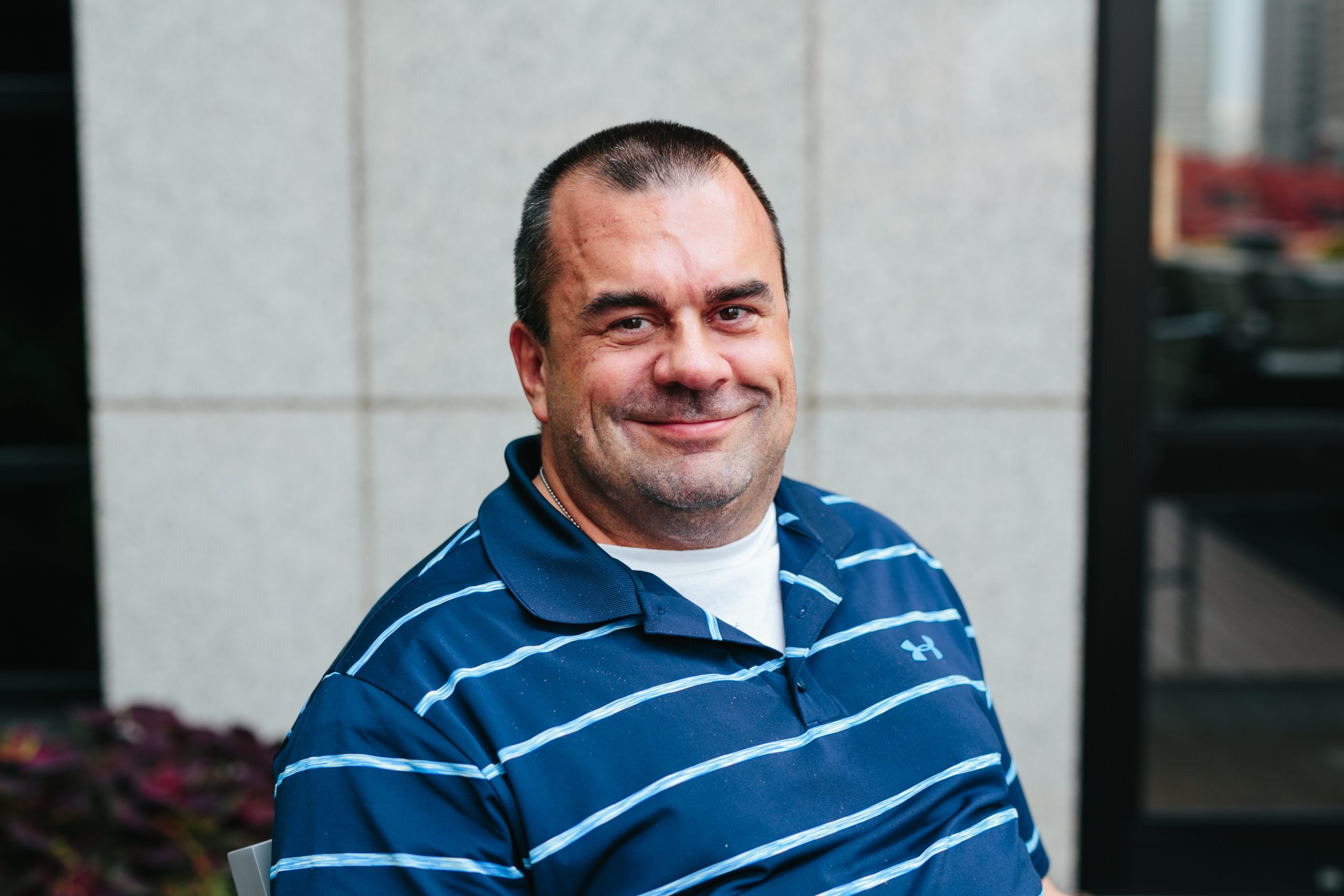 My name is John. I live in the downtown area of Madison, Wisconsin, a short walk away from the University of Wisconsin campus, as well as our unique and expressive “capitol square” area. It’s an area the allows me a great deal of independence, with a lot of access to many of life’s needs, including the ability catch just about any bus line I want. Call me crazy, but I even love the winters here!

I experienced my first seizure in August, 1991. I had just graduated from the University of Wisconsin with my bachelor’s degree and was headed down to Chicago to begin some graduate work at Loyola University. My classmates and I were on a weekend retreat and, during some free time, we were all playing some volleyball. In only a split second I went
from spiking a volleyball to seeing doctors and nurses in a hospital E.R. I was told I just had a tonic clonic seizure! Lucky for me, it was a sand volleyball court.

Throughout the next few weeks, I wound up having two or three more similar seizures, and was eventually diagnosed with epilepsy. Medicine was prescribed at that point, and it worked! I was fortunate enough to have a seven year span of seizure free years. But, the seizures did return, and from 1997 until 2007, I had uncontrolled, generally complex partial seizures, with medicine helping only a little.

Growing up, and while in school, my dream job was always to become a high school teacher. With school and training, I eventually made this happen, and I wound up taking a teaching position at a Catholic High School, in Omaha, Nebraska.

For seven years, I taught theology, speech and debate, and some literature. However, as the seizures returned, it got to a point where I had to give the job up. Needless to say, when you’ve got 25 teenagers in a room with one adult, who is only semi-conscious, the situation is far from ideal.

I had no choice but to move on. Without having a full picture of what I wanted to do next, I started picking at straws. I eventually settled on taking a second chance with a line of work that I had done before teaching. I took a job in Kansas, working in the college student housing field. I was still having seizures, but I thought that working without teenagers would solve at least some of the problem. However, the seizures affected this work badly, too. So, I made plans to move back to Omaha, and figure out what to do next.

Before I moved, my parents got in touch with me. They lived in the Madison area and decided to stop by the Epilepsy Foundation affiliate office there. They were told about the NeuroPace company and the RNS System study that was still accepting candidate applications. After weighing some options and talking to certain people, I decided to give it a chance. I underwent several tests in 2007 and was told that I fit everything that was
needed to be a candidate. So, in February 2008, I underwent the surgery and had the RNS
implanted at the University of Wisconsin Hospital.

Not long after the RNS started delivering stimulation, it cut my seizures in half! It took them from about 30 per month down to about 15 a month. To me, this reduction made the surgery worth it to begin with.

But, in the last few years the RNS has done even better! I’ve seen over a 70% reduction in my seizures!

During this time period, I went through a variety of jobs before realizing that I needed to redesign what I wanted to do. A friend of mine was a counselor at the Department of Vocational Rehabilitation. She and I worked together and looked more carefully at what my true skills and talents are. One of them that always remains obvious is working one-to-one with people, trying to get them to move forward in whatever is holding them back. This often leads to coaching and/or counseling work. To me, this is still a form of teaching.

So, I took a step forward myself and earned my master’s in counseling. My school coursework and volunteer work with the Epilepsy Foundation came together and I was eventually asked to lead the foundation’s epilepsy support group, as well as offer one-to-one work with clients, helping them look for employment, guide them to various resources, help them cope with their epilepsy issues, among other things.

Over the last 10 years, I’ve learned to stop getting angry about life. I decided that I wanted to do something good with my epilepsy, and the RNS System has helped with this tremendously! Not only did it allow me to do something good for myself, but it helped me make some other decisions, one of which is to become someone who can be there for others and help them through some of things I went through.

After 17 years, living elsewhere and trying different things, I can say that I have never had life as good as I do here in Madison. That belief has several different events and decisions factored in to it, but the RNS System is a big one of them. Without my parents stopping by the Epilepsy Foundation office, on a whim in 2007, I might not be writing this today!